Most of us would never think of drinking unfiltered tap water because of the presence of contaminants and sediment in most water supplies. Yet, we shower in that same water, exposing our bodies to a number of harmful bacteria and chemicals. More than half our exposure to harmful elements in water comes from showering. To reduce exposure to the harmful content of your system’s water, consider installation of a shower head water purifier. 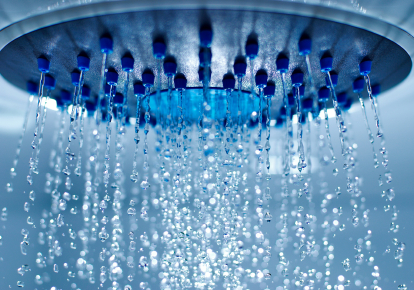 Why unfiltered shower water is harmful

One of the main chemicals to which we’re exposed when we shower is chlorine. Chlorine is almost universally used by utility companies to remove bacteria and other contaminants from water. Chlorine, though, can be harmful itself. Some of the effects of exposure to chlorinated water are:

Exposure to chlorinated water, as anyone who swims in chlorine-treated pools knows, can cause brittle hair and dry skin. The chemical can also react with dyed hair causing color changes. In addition, because chlorine evaporates faster than water, in the heat of your shower, the chlorine in your water supply is converted to gas, and this toxic substance can enter your body through the pores and through inhalation. Chlorine gas exposure can cause allergic reactions, skin disease, or respiratory problems. It can also worsen existing conditions such as asthma or skin afflictions.

Chlorine also reacts with volatile organic compounds in water forming trihalomethanes (THMs). The evidence is not conclusive, but studies have linked THMs with cancer in adults and low birth weight in infants.

What shower head water purifiers do

A filter installed in your shower head can reduce contaminants such as chlorine, Sodium Hypochlorite, Hydrogen Sulfide, lead, THMS and other volatile organic compounds, sediment, and other water impurities by over 90%. Filters can also eliminate bad water odor and reduce soap scum in your shower.

Filtration is either by granular activated carbon (GAC) or kinetic degradation fluxion (KDF), and filters last from three months to one year. There is also an ion filter shower head, which uses negative ions to remove contaminants, which the developers claim never needs replacement.

Negative ions are odorless and colorless, and also act on the molecular structure of toxins and other contaminants in shower water.

Shower head water purifiers come in a variety of styles

Depending on your personal preference and budget, there is a wide range of choices in shower head water filters.

Which filter is right for you?

Deciding on the right shower head water purifier is like buying a new car. There are many factors that need to be taken into consideration. If you’re satisfied with your current shower head, and only want to filter the water, the choice is relatively simple; buy the filter that suits you and install it behind the shower head. If you’re in the mood for a change, the decision becomes a bit more complicated.

Do you have special needs, such as impaired mobility, or do you want the luxury of a massage while taking your morning shower? The choices here are many, and it will depend upon your specific desires. In addition, consider your budget and time constraints. With prices ranging from $25.00 to $300.00, a wide range of budgets can be accommodated. Also consider the time you will have to spend changing the filters to ensure continued proper filtration.

What is not in doubt is the need for shower filtration. Just as you wouldn’t think of drinking water containing toxic chemicals or sediment, you shouldn’t think of washing in it either. For better health and improved appearance, a shower head water purifier is a ‘must’ on your home shopping list.