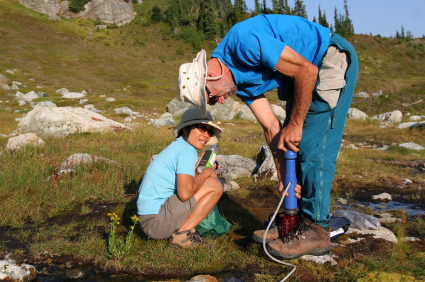 When it comes to the actual construction, two lines of thinking call for different options. One says that the components should be bought pre-fabricated from manufacturers, the other says that components can be made from materials found around the house.

Before making a water purifier, it is best to have the water coming into the house analyzed by a laboratory. It may be expensive to do this, but it is the only way to know for certain what kind of contaminants are present, and thus what kind of water treatment is necessary.

Professional water treatment centers utilize many methods of water purification, such as flocculation, which renders the water clear and colorless. Flocculation is too expensive to use at home for most homeowners. A common method is to use activated carbon in order to filter out basic toxins from municipal water. Activated carbon is made from charcoal. It filters water based on its incredible absorption power; activated carbon primarily removes organic compounds that relate to taste.

How To Make A Homemade Water Purifier

Making a homemade water purifier involves constructing a filter and a bottle or container to hold the purified water. This kind of device is going to be complicated because of the different methods involved.

There should be a significant difference between the boiled water and the filtered water.

For most homeowners, this process will be enough to result in clean, clear water. If they still feel that the water needs to be purified, the one option that remains is to purchase an ultraviolet filter from a local store. Ultraviolet radiation purifies the water even further by killing the remaining microorganisms too hardy to be killed by boiling or filtered by activated carbon.

After being treated in the above manner, water is considered purified by most professional organizations. It is unlikely that any toxins or dangerous microorganisms remain after going through such a process. The homeowner can relax because they have successfully treated their water so that it is now safe to drink.

Homemade water purifiers can be easily made if the homeowner is willing to take a little time to do the job properly.

One Response to Homemade Water Purifiers